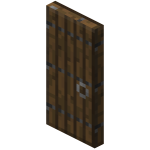 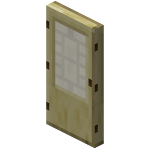 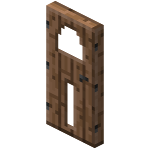 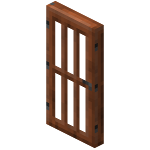 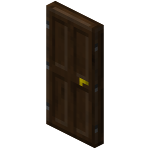 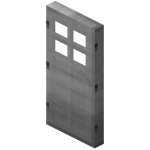 Iron doors can take quite a bit of time to destroy, even with a pickaxe. To destroy them more quickly, simply break the block beneath the door. Builders can discourage this by placing a lava block at the top of a 1x1 shaft above the door, and/or by placing the door on top of an obsidian block (or Bedrock, if you are in creative mode.)

Iron doors can be used to trap other players. Place a pressure plate in front of the iron door. The door will open, allowing a player to go through the door, but the door will close as soon as they go through it. If you make it so that destroying the door will kill you, they are trapped unless they have a redstone torch, button, lever, etc. Just make sure they can't break down the walls or go through the floor!

Villagers cannot operate Buttons and Levers which makes an Iron Door usable to lock a house in a generated Village.

An Iron Door is the only door zombies cannot break through.

Wooden doors can be found in NPC Villages. Strongholds contain many wooden and iron doors.

If two doors are placed adjacent to each other, they will orient with their handles inward, creating a double door. Double doors can be opened by simply placing two pressure plates directly in front of the doors and stepping on them. Each pressure plate will open its respective door, and activating both pressure plates will open both doors.

Boats can also pass through double doors, with the doors acting as locks on canals or docks. 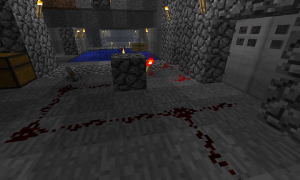 A pre-12w06a example of when you had to use redstone with a NOT gate and a switch to open/close a double door correctly. The redstone logic/circuit can be hidden underground.

Before 12w06a, doors were not implemented intuitively for redstone. Powering both doors would lead to one looking open and one looking closed, and vice versa.

The problem was that double doors looked fine, but in reality, the second door was rotated 90 degrees from the first one, and then placed in the open position by the game. Opening or closing both doors simultaneously using redstone yielded unexpected results[1]. If one door was "on" (receiving power), the other door had to be "off" in order for both doors to be open or closed. Players could use this workaround and this other workaround to achieve a more desirable effect. [2]

Placing a pressure plate on the "safe" side of your door will automatically open the door as you approach it. If you walk straight through the door, the plate will close the door behind you. This is particularly useful when attacking mobs, because they cannot get back into your base through the open door. It allows you to devote yourself to attacking the monsters instead of having to turn and close the door behind you.

An interesting property of a door is that you can walk on top of them. An easy way to make a draw-bridge is to use two doors, two switches, and at least a 2 by 2 by 2 deep pit. Have the two doors on opposite sides at the bottom of the pit so that when opened the doors create a small line in the middle. Put the switches on the same sides of the door so that when pushed both doors will open; you should have just enough time to get across. This method has been rendered obsolete by the trapdoor in Singleplayer, but is still effective in Multiplayer as there are no 'iron' trapdoors which cannot be toggled manually.

This 3x3x3 reusable mob trap can be made using only 4 doors, 1 pressure plate, and 1 block of anything. The first thing you want to do is stand on the center of where you want your trap to be. Then place the doors making sure they are reversed on the 4 blocks that are in front, behind, left, and right of you. When that is done exit the trap by opening one of the doors and place a pressure plate in the centre of the mob trap. As soon as you put the pressure plate all the doors should open at once. Finally, to keep mobs from exiting place the 1 block on the top of the trap to keep them from jumping off the pressure plate and opening the doors. It is recommended that you use wooden doors for catching mobs because if you trap yourself you can easily get back out.

Water placed on the pressure plate will be suspended and drown any mob caught inside; mobs cannot see players through the closed doors, so are completely harmless while drowning. Prior to 1.8 Beta This trap can also be made into a re-loadable land mine trap. Just dig 2 blocks into the middle and fill the bottom with water. Then put a TNT block on top and the pressure plate on top of that.

This mob trap no longer works with the new mob AI from 1.2

Half doors require either an inventory editor, a map editor, client mods or multiplayer commands (ID=64) to obtain and place the door block, which is the bottom (with sub-value 0) half of the door. It can be placed like a normal door, but in the case of a block refresh it is dropped.

Wooden doors were added in Infdev, having a texture without the holes inside, although when placed they could be seen, and blocks could be mined/placed through them. Same as for Iron doors, but texture as an item was changed in Alpha 1.0.1 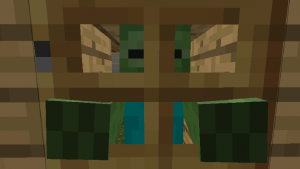