Experience can be gained from several different sources:

Experience orbs fade between a green and yellow color and will "float" or glide toward the player up to a distance of 6 blocks, speeding up as they get nearer to the player. Experience orbs pulled towards a player are slowed by spider webs.

When collected, experience orbs make a christmas bell-like sound for a split second. Unlike resources, experience points are picked up gradually: no matter how many orbs are in range of the player, they will be added to the player's experience one at a time. In extreme cases, this can result in the player being followed by a swarm of orbs for many seconds. If an experience orb isn't collected within 5 minutes of its appearance, it will disappear.

Experience orbs vary in value, and most sources drop a random number of orbs with the total experience award divided among them. The general worth of an orb is reflected by its size, but the size does not increase much per point, and not at all past a certain extent. The maximum experience that can be held by orbs of various sizes follows an irregular but roughly exponential progression: 1, 3, 7, 17, 37, 73, 149, 307, 617, 1237, 2477. Thus the ender dragon drops 1 orb of the largest size (2000 points), and 10 of the next-largest (1000 points), but most mobs will be limited to the two or three smallest sizes.

Experience orbs can be destroyed by fire, lava, explosions and cacti, and can trigger pressure plates and tripwires. Although mob drops spawn the instant the final blow is dealt to the mob, experience orbs do not until the mob entity disappears and the smoke appears. When a player picks up an experience orb from a bottle o' enchanting while riding on a minecart, the minecart will stop instantly.

By using an inventory editor, you may create a “spawn experience orb” egg, the ID being 383:2, although it will not actually spawn orbs.

The formulas for figuring out how many experience orbs you need to get to the next level are as follows:

One can determine how much experience has been collected to reach a level using the equations: 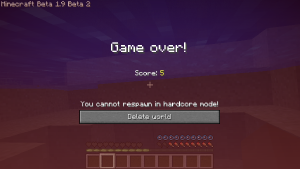 Example of Score in Hardcore

In an image of the new lighting system, a small yellow (the orb was yellow due to a warm light from a torch) spherical shape can be seen on the left side of the screen,[1] but a day after the photo was published Notch claimed it had an error and posted a new one, this time, without a yellow sphere.[2] In a later tweet, Notch showed a picture of a Beta 1.7 change-list (back then the adventure update was supposed to be in beta 1.7). Although it was completely blurred out and was, at first, thought of as a joke,[3] but then Notch stated that one of the pictures with the new lighting system and the change list had a secret in them,[4] and people all around the web started speculating.

One place that people discussed it was on the Minecraft forums, where it was discovered that the tabs at the top of the change list that were partly covered, could be decoded based on the 2 pixel tall pattern available in the image.[5] 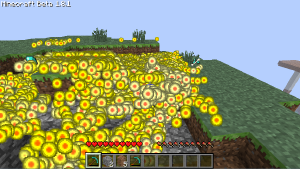 An example of the excessive amount of experience orbs dropped upon death in Beta 1.8, causing extreme performance drops.

The experience level costs were heavily revised in snapshot 12w22a and 12w23a. Before these, reaching level 50 (the maximum usable on a single enchantment) required 4625 experience, corresponding to defeating 925 hostile mobs (assuming the "common" ones.) Afterwards, considerably less experience is needed to get into higher levels (The amount which would formerly get the player to level 30 now gets them to level 39). Higher levels cost more experience than lower ones, but the levels are still easier to get than in 1.2.5. Now level 30 is the maximum for enchantments, and that cost is equivalent of 165 "common" mobs, less than 1/5 the old price.