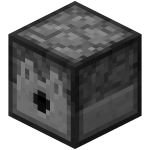 All items which are fired out have a random variation in direction.

When a dispenser dispenses an item, it emits a clicking sound (unless the item is a projectile or a Spawn Egg) and a puff of smoke. If it is empty when activated, it emits a slightly higher-pitched click.

Unlike most other redstone devices, it may be triggered by redstone wire placed up to one block adjacent to it, as well as running directly into it; therefore, a single redstone wire can trigger up to 5 dispensers in a cross pattern. This allows easy creation of large walls of dispensers. You can place redstone on dispensers by sneaking when placing.

Another use for dispensers is delaying. Using a single water current and a wooden pressure plate, you can delay a signal up to 11 seconds. The equivalent of this is 28 redstone repeaters, which is quite expensive. For even longer delays, the item despawn time can be utilised. This can be done by using a dispenser to eject an item onto a pressure plate, which then has its current inverted and wired to the next dispenser. Dispensing more than 1 item every 5 minutes will cause them to stack and no extra time will be added to the 5 minute despawn of the first item.

When powered there is a delay of 2 redstone ticks (4 game ticks) before a dispenser fires. [1]

Due to the dispenser's ability to equip armor, it is also possible to make a set of four dispensers arranged around a one block space that will equip a full set of armor all at once when a button is pressed.

Dispensers are most effectively used offensively with a 5-clock or pulser hooked up to a pressure plate or switch.

A dispenser will work if it is placed underwater, even without any blocks touching it, by placing a redstone torch underneath it. Also, it can be properly wired by placing the redstone in a tunnel underneath the water.

A mob killed by something dispensed will not drop XP.

Placing a trapped chest adjacent to a dispenser and opening the chest triggers the dispenser.

If each individual item were picked with equal probability, as if each item of a stack were in a different slot, the distribution would stay at roughly 75%/25% even over time. Indeed the output would be a uniform random permutation:

While such behavior is impossible to replicate for anything over 9 items, it can be approximated by splitting stacks such that each stack is fairly small and has the same number of items. For example, three stacks of 6 dandelions will neatly complement the stack of 6 poppies. Splitting into stacks of 3 would be even better, since smaller stacks can't retain as much 'undeserved' probability.